Kim Myers
Parma, Idaho
I am the Parma 1st Ward Food Storage Specialist. I have been asked to create a blog to share with people in our area regarding food storage ideas and thoughts

When the local grocery store puts these 10 lbs boxes up for sale we usually buy several. We purchased these boxes for $11.99 a box. Roger only bought 30 lbs. this time for me to can. 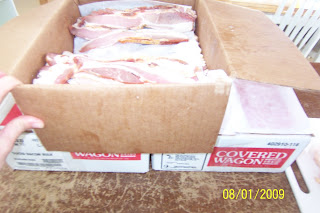 Everyone has their own method of canning bacon. Some like to fry it up in stripes and then wrap it in Parchment paper, or cut it up in pieces then can it. Cutting it up into pieces works best for our family. Having it cut up into pieces usually cuts down on the cook time, and is just faster for us. 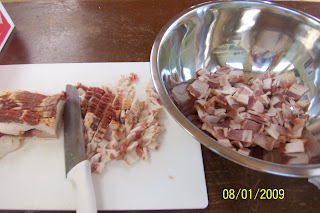 Here's the jars ready and some bacon already frying. Make sure you've cleaned the jars, and looked them over for any cracks or chips. 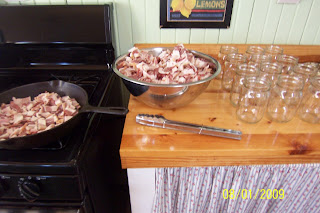 Some of the bacon sometimes has alot of fat on them, so I'll cut away the fat and keep it. With the fat we save I'll then render into lard. 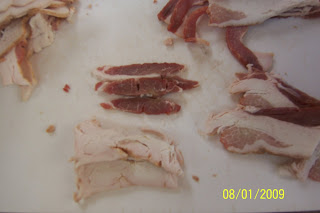 Once you've fried the bacon place it in the jars. You'll want to leave alittle fat on the bacon so you'll have fat to pour over the pieces in the jar. Usually you'll want to pour the fat about half way in the jar. Here's some pics of mine ready to go into the cannier. Place your lids in boiling water to sterilize them. Clean the jars and rims (especially the rim and threads) after you've place the meat in and before you place your lid on. Place the lid on using a lid wand. This usually comes with canning utensil sets. Then place the band on till it feels slightly tight, just finger tip tight. 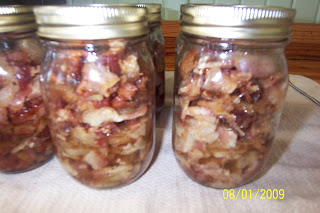 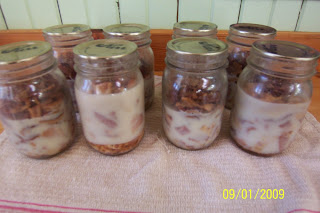 Thanks for the tutorial, I do have a couple questions though, if you don't mind.

1. How do you normally use the bacon once its canned.

2. Do you fry the bacon crispy or do you just somewhat fry it because it cooks more during the canning process?

3. Does the taste/texture change because it has been canned?

Thanks for the questions, and I'll answer them in order.

1. I normally use the bacon in the morning in eggs. I'll open the can and scope out some of the bacon along with the fat and heat it up in my frying pan. The fat helps to coat your pan so when you add your eggs they won't stick. Once your bacon is slightly heated and fat melted add your eggs and cook. Then if you want add cheese, salt, & pepper. Easy, yummy, scrambled eggs.

I use the bacon in anything that calls for bacon. I'll put it on salads for bacon bits, and in broccoli salad. The great thing is the bacon is already cooked. All you may have to do is slightly heat it up, and there's no mess. I've used the bacon in potato cheese soup, and for quick BLT sandwiches. You can use it however you want. If we have leftover's from a jar I've opened we'll just eat the bacon for a snack. I can't really say I have a favorite recipe I use it in, because we use it alot.

2. I fry my bacon till it's done. Not really crispy, but done enough to go ahead and eat. Then I'll place it in the jars.

3. Canning it doesn't really change the texture except you won't have really crispy bacon. The flavor is still the same, and no one I've ever given it to has noticed it was canned bacon instead of freshly made. People usually say how great it is.
Posted by Kim Myers at 1:37 PM